Turning a Challenge Into an Innovative Design Solution

“Necessity is the mother of invention,” claims a popular adage. But sometimes lasting change comes from a good old-fashioned challenge. 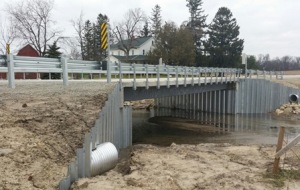 The Amish Sawmill Bridge in Buchanan County, Iowa is the first steel press-brake-formed tub girder bridge in service in the United States.

One example is when the Federal Highway Administration (FHWA) charged the North American steel industry in 2009 to “develop a cost-effective short span steel bridge with modular components which could be placed into the mainstream and meet the needs of today’s bridge owners, including Accelerated Bridge Construction (ABC).” Grappling with a national bridge inventory overrun with structurally deficient and functionally obsolete structures―nearly half of which fall in the short span category of under 140 feet―the agency was ready for some new ideas.

Stepping up to the challenge, the Short Span Steel Bridge Alliance (SSSBA) reached out to 30 steel-related and government organizations, university faculty and bridge owners to tackle the problem. The Modular Steel Bridge Task Group was born, with Karl Barth, Ph.D., P.E., Samples Professor – Civil and Environmental Engineering at West Virginia University, appointed as chairman. After considering several options, the group decided on a shallow steel press-brake tub girder technology ― also known as folded plate girder or folded plate ― to meet the FHWA objectives for economic value, innovation, and ABC practices. A preliminary specimen design for the new system was developed, and three years of initial testing followed. Remarkably, the idea went from concept to reality in just three years.

What’s a PBTG?
The press-brake-formed tub girder (PBTG) system is different from a traditional bridge because it consists of modular galvanized shallow trapezoidal boxes fabricated from cold-bent structural steel plate. The modules are available in hot-dipped galvanized or weathering steels, and can be easily transported by truck to the project site.

The system utilizes standard plate widths (based on availability) and is optimized to achieve maximum structural capacity, with most of the steel in the bottom flange and increased torsional stiffness. It is versatile for multiple-deck options.

Mastering the ABCs
The press-brake-formed tub girder system utilizes Accelerated Bridge Construction practices, since:
•  The tub girders can be installed in one or two days.
•  It’s modular, allowing the use of a precast deck.
•  It’s cost-effective―as much as 1/3 less than a standard concrete girder structure.
•  It’s simple to fabricate, requiring very little welding.
•  It reduces the need for additional details such as stiffeners and cross frames.

Press-brake-formed tub girders can be used for both tangent and skewed configurations, as well as simple and continuous spans. They are recommended for single spans up to 60 feet, but can be spliced for spans up to 80 feet.

From Blueprint to Service
Buchanan County (Iowa) Engineer Brian Keierleber, P.E. was awarded a grant from the FHWA’s Innovative Bridge Research and Deployment Program (IBRD) to replace the Amish Sawmill Bridge at 1358 Dillon Avenue in Fairbank, Iowa. The $350,000 grant was awarded on the basis of using a trapezoidal bent steel girder section supported on Geosynthetic Reinforced Soil (GRS), laying the groundwork to install the first PBTG bridge in the United States.

Construction on the Amish Sawmill Bridge began in late summer 2015 and was completed in December 2015. The deck for this project was cast-in-place, rather than using modular pre-cast deck units, which added to the time of construction. It was built with a local crew, and was dedicated on January 8, 2016 with a ribbon-cutting ceremony featuring several government and transportation officials.

The idea is catching on, and three more PBTG bridges are scheduled for construction in 2016―two in West Virginia and one in Ohio. In February 2016, the Ohio Department of Transportation and Muskingum County were awarded an Accelerated Innovation Deployment (AID) Demonstration grant to replace a bridge on County Road 7 – Cannelville Road using PBTG technology with a steel Sandwich Plate System deck.

Several state Departments of Transportation have expressed interest in building PBTG bridges in their jurisdictions. The technology is appealing because it offers: 1) significant cost savings, 2) ease in shipment and fabrication, 3) accelerated construction, 4) design versatility, and 5) sustainability―steel is the world’s most recycled material and at the end of the bridge’s life, it will be transformed into another steel product. With so many benefits, the press-brake-formed steel tub girder technology can help rebuild America’s infrastructure―an innovative and effective solution to the FHWA challenge.

For more information on how press-brake-formed tub girders can meet your bridge replacement needs, contact Dr. Karl Barth at Karl.Barth@mail.wvu.edu or Rich Tavoletti at rtavoletti@steel.org.

Dan Snyder is director of the Short Span Steel Bridge Alliance (SSSBA), where he works with SSSBA members to educate, inform and promote the many advantages of using steel for short span bridges including cost-effectiveness, time-saving bridge designs and life cycle analysis advantages. He is a digital marketing enthusiast, appreciating both the creative side of the process as well as the science behind it, and provides regular updates via his Pull Marketer blog at https://www.pullmarketer.com/. Dan can be contacted at dsnyder@steel.org.
View all posts by Dan Snyder →
This entry was posted in Accelerated Bridge Design and Construction, Bridge Design Economics, County Bridges, FHWA, Modular Bridges, Plate Girder, short span bridge design tools, Short Span Bridges, Short Span Steel Bridge Alliance, Steel Bridges and tagged Amish Sawmill Bridge, buchanan county iowa, Muskingum County Ohio. Bookmark the permalink.